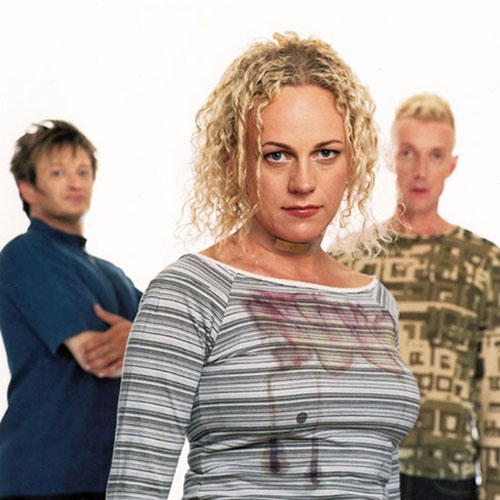 Paul Carnell (keyboards) and Lucia Holm (vocals) met in the mid-eighties. She’d done a degree in music and was a fan of modern electronic classical composers. He’d been in a band called Newspeak on Beggar’s Banquet and a few pub rock combos. Acid house changed both their lives.

“It was just total enlightenment, fantastic,” remembers Paul. “My big theory on it was that the cold war had come to an end and everybody was ready to party.”

A club called The Barn in Braintree became the crucible for Paul and Lucia’s musical awakening.

Watching some of the PA’s put on every night by the likes of Adamski and The Shamen, they realised that they could do better. Marshaling a guitarist, a bass player, and a DJ with two dancers, they formed a six-piece live act which soon began putting on formidable performances, helped by elaborate set-dressing, clothes, and lighting from a friend who had studied fashion at St. Martin’s College. Within six gigs, they started to attract record label attention and, as Paul recalls, “before we knew it, Sony were offering us large amounts of money and we couldn’t really say no.”

Sunscreem’s run of hits began in 1992. Love U More was number one in three different club charts and made the top thirty, even though Radio One was then studiously ignoring most dance music. A tour of America supporting the Inspiral Carpets pushed Sunscreem onto US college radio, another with New Order followed.

Their first album, O3, sold 300,000 copies in the States and did well all over Northern Europe. But, in the way these things often happen, it all started to go a bit awry. One of their dancers left because his father had died during the American tour; the following year, their stylist and creative director was killed in a car crash. Then the guitarist left to form a band with his girlfriend, and the original drummer and founder member left due to drug problems.

Sunscreem’s second album, the defiantly titled Change Or Die was released in 1995 (*1). It contained two enormous club anthems, which sealed their reputation on the burgeoning American rave scene: When and Looking At You – the biggest club track of 95/96 and “it’s still being used to close the night now,” comments Paul proudly. Yet as they were getting more successful in America, dance music in Britain was moving towards a darker, less song-based style (think Underworld) in which Sunscreem no longer had much of a place.

After a row with their American record company, who Paul says persisted in releasing unapproved mixes of their songs with the wrong artwork, Sunscreem left Sony. They joined Pulse-8, home of Pizzaman, a.k.a. Norman Cook. Pulse-8 were on their wavelength but unfortunately went belly-up in six months. After that Paul and Lucia decided to take control themselves, at which point their luck improved.

A fan who was a student at Imperial College, London, built them a website (this was at a time when few people knew what a web site was, let alone how to make one), through which they successfully released their third album. And the band remained in demand as a touring outfit, travelling around America and Scandanavia for much of the late nineties.

“For the past couple of years,” says Paul, “we’ve just been seeing where the wind takes us.” Ten Mile Bank happened in a serendipitous way. Their percussionist, Nick, held a party up in Norfolk and played a DJ set consisting entirely of Sunscreem records, “white labels, remixes, and things we’d just put 500 copies of.” It sounded brilliant on the night, and even better on tape the following day. Sunscreem were once again going to put it on the Internet “but some people heard it and told us we should put it in the shops.”

“At the end of the day,” declares Paul, “we’re still the best at doing vocal club tracks. No one except us has ever produced more than one good one. Look at Alison Limerick’s ‘Where Love Lives’. Did she do another?”

Of course she didn’t. But Sunscreem have gone on producing tracks that can and do stand with any dance music made since acid house. They’re still incredibly creative, and they still go clubbing. In fact, the people who ran The Barn have just started putting clubs on again. Sunscreem went, of course. It’s another sign that it’s their time again.