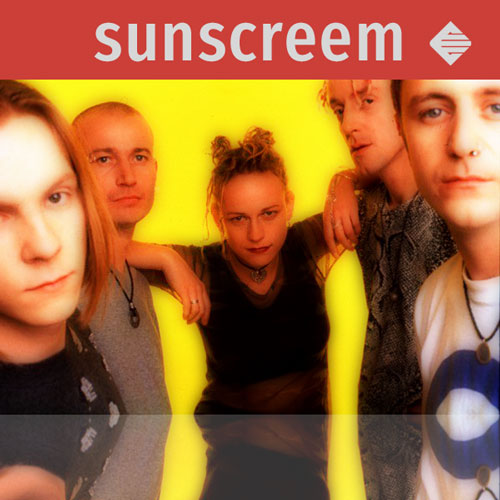 Formed in 1990 by Lucia Holm and Paul Carnell on the wave of the dance explosion, Sunscreem broke the mould right from the start by playing with a full live band at raves, free parties, and clubs. They pioneered modern live dance music by doing away with the “diva, two keyboard players and a DAT machine” format which had been the standard of Club PA’s up to that point.

The live act… its enthusiasm, its attack and its upfront guitars put Sunscreem in a completely different category from the usual anonymous ‘three songs and off’ club PA.Mixmag

Sony S2 snapped up the band after only 6 gigs and were quickly rewarded in July 1992 when Love U More hit No. 1 in all three UK Dance Charts (Record Mirror / Music Week / Mixmag ), the first time this had ever been achieved. Subsequently, this success was repeated in the US Billboard dance chart.

Many hardened clubbers will go all wobbly on the dance floor, full-on soaring heat, wet cheeks, the business.i-D

The year finished with a DMC / Mixmag Award for Best Newcomer, students across the UK voted them Favourite College Band and they even managed to win an award for Best New Scottish Dance Act. (Some achievement for a band from Essex, England!)

They also achieved an all-time first with simultaneous No. 1’s in both the UK & US dance charts for Pressure US and Love U More, respectively. Love U More was placed in no less than four US charts, including Rock and Alternative.

With the release of Perfect Motion, Sunscreem had written two classic club anthems of the time.

In the UK, between a punishing schedule of live appearances at clubs, colleges, raves and venues, they managed to squeeze in a tour with Jesus Jones. They also accompanied New Order on their Republic amphitheatre / stadium tour of the US and took their unique live set to a whole new audience helping their first album, O3, to become the biggest UK debut in the US in 1993.

In the UK O3 brought it home to the cynics that a dance band could exist who delivered powerhouse dance tracks that were real songs with lyrics that meant something and who could actually play their instruments. Spawning 4 Top 30 hits, O3 became the seminal clubbers album.

Lucia, that dreadlocked harpy from Heaven, with a voice like Harriet Wheeler with balls, is one of the precious few who sound consistently wonderful on the dance floor… Perfecto pop, Delirious dance. O3 cuts like a knife, both ways. Hooj Choons? Hooj achievement my friends.NME

The Sunscreem message spread as it always has by word-of-mouth, giving them Top 40 hits not only in the UK and US but as far afield as Finland, Australia, and Brazil.

Their new album Change Or Die is a statement that Sunscreem are more than just a band. They are a constantly evolving project and a like-minded family of new and old friends, centred around Lucia and Paul, who together continue to combine underground attitudes and underground rhythms with a full-blooded pop sensibility.

If they continue to create such timeless music, I may just tattoo their name on my forearm!Melody Maker