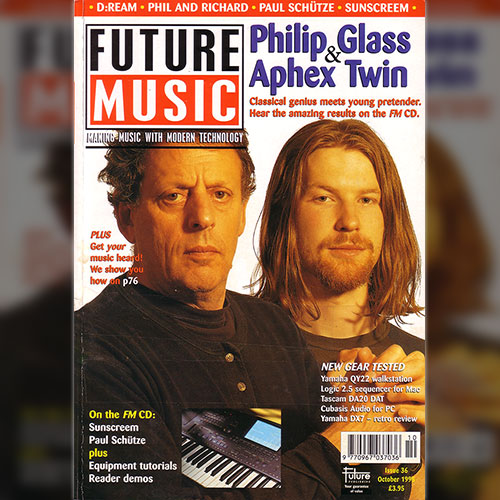 Following single and album successes two years ago, Essex’s finest are about to bounce back with another album of irresistible songs and grooves. Dave Robinson talks to the newly disk-hardened Sunscreem.

In 1993, the Sunscreem anthem Love U More appeared in four US charts: rock, alternative, dance and the main Billboard chart. It’s an achievement that reflects precisely what the Essex 5-piece originally set out to be when they formed in 1991: a band that can deliver storming dance tracks with big, big choons and play live. Stick a guitar in the mix and so mess with the norms of pigeon-holing while they’re at it.

“Labels are for supermarkets anyway,” grins Paul Carnell, as we sit in Sunscreem’s Retreat studio with four-fifths of the current line-up (guitarist Wayne Simms is absent).

We talked briefly to Paul and Lucia at May’s Tribal Gathering (see FM 33), and now we’re here to discuss their forthcoming album Change Or Die, the follow-up to 1992’s excellent O3 (*1). But this second album is 100% Sunscreem – not the radical departure such an illustrious title suggests. Rob Fricker, the band’s bass player, explains: “It’s mainly ‘cos we’ve used some slow to mid-tempo tracks this time.”

“It refers more to the lyrical content,” adds Lucia.

“I don’t think it is that different, really,” comments Paul.

The most significant change has been the move into the brave new world of hard-disk recording.

“The album has taken about a year in the real recording terms because we’ve had to struggle to get to grips with Pro Tools, if the truth be known!” reveals Lucia. Teething problems with Digidesign upgrades further hindered progress, “though I should add they have been very good to us,” stated Paul. He goes on: “When you record 20 tracks with ten different takes on different reels and you’re trying to piece it all together, it’s a lot to deal with.”

Most takes were made to conventional 2-inch tape before they were transferred to the 8-track Pro Tools on the Mac Quadra 650 for assembly and tempo matching with time stretch. But the tapeless studio is not the inevitable next step.

Lucia: “We fiddled with the tracks on the Mac, then put them back on to tape, and then mixed them.”

Paul: “There’s something inherently good about having music mixed on a tape. Some people say that they can throw their tapes and mixing desk away. I totally disagree with that because at the end of the day it’s still just a bloody computer. Signals going into a mixing desk interact in a certain way – it’s not just 0s and 1s.”

Lucia: “You can’t get the fine tuning that you get on tapes.”

Paul: “Nothing beats leaning over the console at two in the morning, twiddling knobs and saying, ‘Yeah, yeah, yeah!’”

As they did on O3, Sunscreem have blended one album track into another.

“This time it was much easier, ‘cos we did it with Pro Tools. Before we had to sample sections and chop up tape,” says Rob.

“Hard-disk recording allows people to put things together in ways they never could before,” says Paul. “I think this is where it will come into its own in a more creative way.”

Jarre was reported to have said our mix was the best he’d ever done.NME

An EP of remixes of the first single from Change Or Die, called When, recently pushed Sunscreem to number 2 in the dance chart. The band have tried their own hand at remixing for Jean Michel Jarre at the time of his Chronologie tour, two years ago. “He asked us to do it. He was reported as saying it was the favourite remix he’d ever done. It’s one of the best things we’ve done, too.”

The band are sure his motives were genuine: there was no hidden credibility subtext behind the remix request. “For someone in his position, credibility is success,” says Paul. “I don’t think he’s the slightest bit interested in whether one small group of music people think he’s credible or not.”

“No, I think he was just interested in a different angle,” adds Rob.

Though the band mix album tracks at The Retreat, their singles are mixed elsewhere. Paul: “It’s so difficult mixing stuff for the radio. The ear candy that’s played on the radio isn’t suitable for clubs and vice versa. Best to leave that to an engineer.”

Remixing isn’t what Sunscreem are known for; neither is using ‘obvious’ samples (apart from the rather naff excerpt from Stravinsky’s Rite Of Spring on O3). Yet they’ve chosen to list a couple of obvious FSOL snatches for White Skies (*2): a percussion loop and a distinctive ‘clink’ from the seminal Papua New Guinea.

“They get a credit and everything. It’s all above board,” says Lucia.

Paul recalls how they knocked up a demo featuring a whole load of samples, then, as is commonplace, tried to re-record the tracks without the lifts. But they didn’t care for it as much, so the samples had to stay.

The band took a more active approach to percussion loop creation for Change Or Die. Rob: “We set a load of mikes up in the live room next door, got a groove going, got it down to tape, then listened back, putting the sections we liked into Pro Tools. We also tried some wackier things that we haven’t done before – like lining the walls with corrugated iron for a live sound, and setting the PA up next door, piping Lucia’s vocals through and recording the sound of the room and using that as a reverb. We recorded to DAT and lined it back up with the vocals on the Mac.”

“But we have used sampled loops before,” continues Lucia. “We’ve even used a tambourine loop straight from the Akai sound library. At least we haven’t used Funky Drummer yet!”

It’s in video sampling where Sunscreem hope to make innovative in-roads. Paul hinted at a secretive future project back at the Tribal Gathering event in May; now he reveals all.

“The technology [for video sampling] is just getting cheap enough. There’s been a lot of talk about interactive video along these lines, but rather than wait for something to appear on the shelves, we’re working with a small company to get something together ourselves. We’d like to get MIDI sequences triggering involved. And hopefully when we tour in October it might just start to come to fruition.”

When they hit America again, Sunscreem could be the rock dance alternative pop video-sampling band. Will the US charts cope?

“We made this six years ago. It turns the Roland SDE-3000 into a sampler: load a bass drum into the delay, then trigger it from a mic in less than a millisecond. Lots of mix engineers got into it for replacing kit sounds. We sold 3-400 of them. It helped pay for the studio. We see them and say, ‘That’s our baby!’ and no-one believes us.”

If you had to pick out a Sunscreem instrumental trademark, if would probably be the characteristic sweeping, phasing effect that enhances many of their synth sequences.

“It’s the SH-101 with Mr Shifty!” exclaims Lucia. Mr Shifty is the black-box frequency shifter, built by the band some time ago. It has a sweep rate control, frequency selector, and its own stereo pair permanently patched into the Raindirk console.

Rob and Paul give me a demonstration: a bass line from O3, played flat from the BassStation, is transformed into an other-worldly organic swirl.

This is Kali, a remix of spira-delic track Syclik, featuring Mr Shifty in full effect. ON the CD-ROM, for both Mac and PC, you’ll find a short movie we made in the Sunscreem studio. Let the band do the talking…