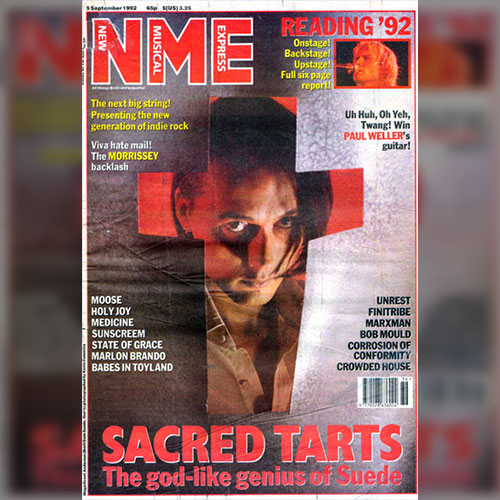 E Will, E Will Rock You!

Attention, technophobes, guitar geeks and pop conservationists. Cast off your lumpen prejudice about ‘dance acts’ being culturally useless E-user-specific digital cheats and let ROGER MORTON take you into a world where technology goes over the edge of sanity, where SUNSCREEM, FINITRIBE, ESKIMOS & EGYPT and OPUS III are putting flesh and blood and sweat and charisma and politics and tunes into “that BPM stuff.”

But it was not a rock figurehead, or patented pop personality, or indie cartoon character who stood cleaning their teeth one day in a Finnish log cabin and felt the hot wet breath of a huge elk, antlers wrapped in seaweed, panting in their ear. It was not one of the strumming soap opera regulars who had to flee from an elk attack.

It was Lucia, the half-Finnish goldilocks singer and songwriter with Essex dance popsters Sunscreem, and if the channels of communication or the nation’s musical life were flowing normally, Lucia’s anecdote would have travelled about as far as an elk with its legs shot off.

On a Saturday night in the small town of Braintree, Essex, the converted Embassy cinema gradually fills up with waist-coated youth, and upstairs in the makeshift dressing room Sunscreem prepare for the night’s gig. It’s an average scene of pre-show chaos. The five Sunscreemers, a disparate hotch-potch of scruffy semi-fashionability, loll around the beer bottle-strewn room.

The promoter fusses in and out, wondering where the next DJ’s pissed off to. Lucia stands to one side, chatting about her former career as a gardener and elk fighter and wondering what to do with the giant cut-out of Mel Gibson she’s just found.

It’s a regular scene of babbling and boozing. It could be a rock band limbering up for the onslaught. But in one corner lies an innocent-looking stack of computer discs, as incriminating to some as steroids in a shot-putter’s shower bag.

Sunscreem are a band and they are popular – their recent single Love U More was a Top 20 hit – but, in the eyes of technophobes, pub rock reactionaries, bardic bores and guitar freak geeks, they could never be a proper pop band. They play at raves, they use computers, their musical reference points are mostly post-acid house, so they must be just a dance act.

And over a decade after New Order’s Blue Monday proved otherwise, the belief is still widespread that if it smells of dance then it must be short-life, short on ideas, culturally useless, un-musicianly, ecstasy-user-specific, incapable of humour or rage, and highly unlikely to be the product of personalities worthy of investigation. It’s just dance music, innit… and that means it’s as one-dimensional as a cardboard cutout of Mel Gibson.

So how come Sunscreem play that night with the sort of power, scope and charisma that every greedy young rock band aspires to, but which rarely comes to life away from the bedroom mirror? Lucia bounds around the stage like a zero-gravity antelope, wrapping breathy vocals around the computerised power surge, while keyboardist Paul, bassist Rob and drummer Duane bend the mood from euphoria to tranquility and beyond.

There are tunes, there’s a thoroughly absurd pare of male dancers, and there’s gonzo guitarist Darren whacking out exploderama chords and acting much like a man applying for a job in AC/DC. It is nothing like a PA. It is something like a vivid, exciting, multi-pronged ‘gig’, where you’re encouraged to dance instead of slump in a corner and neck as much lager as possible. But they’re probably digitally cheating aren’t they? And anyway, it’s a separate world, all that BPM stuff?

Driving back into London after the Sunscreem show, yanking round the M25 orbital route along which, in summers past, the early rave traffic headed out for frazzled nights in the fields, we flip the radio dial in search of hot truckin’ music. Late Saturday night outside London, there is one golden oldies station playing Toto and Phil Collins, one phone-in show for suicidal insomniacs and four amphetamine-hardcore pirate dance stations blasting out utter nutter computer breakbeat blitz noise.

It’s the sound of technology going over the edge of sanity, mental rave tracks sped up by the DJ so that the vocals sound like Pinky & Perky. For all its extremity, however, that cyborg cranium-crush sound is being taken on board by legions of nutter youth. When the parameters of dance music have wigged out this much, it’s even more preposterous that the likes of Sunscreem or Finitribe or Eskimos & Egypt or Opus III and a hundred other club-spawned pop bands should be regarded as not pop, alien to the traditions of rock ‘n’ roll and insignificant compared to this week’s imported grunge band.

Finitribe and Eskimos & Egypt have no more in common with crap nosebleed techno or miming Belgian rave trios than Suede have with spandex metal, and they should not be tarred with the same brush.

While embattled pop conservationists dig their heels in viewing anything techno-tinged as foreign and irrelevant (like big band fans in the ’50s blocking their ears to rock ‘n’ roll), the high streets of the nation mutate into clubbing fashion catwalks, and queues for clubs gets longer. If part of what it is to be a good pop band is to capture the moment, to be plugged into the times, then the successful bands right now are the ones dealing in rota-pulses, states of euphoria, New Age dreams and nightmares and techno-metal collages, not the ones re-writing glam rock or punk rock or Hüsker Dü rock.

No-one anywhere would claim that all dance-nurtured music was worthy of the same attention that rock bands get, but after The Shamen, The Beloved, the KLF et al., it’s obvious that some of it is. And you don’t even have to take ‘sides’.

Sunscreem, who played at Reading this year, Finitribe, whose album toppled the indie charts recently, Opus III, who have hogged radio play across the boards, and Eskimos & Egypt, who head out on a college tour in September, are already in the process of proving themselves in anybody’s territory, on anybody’s terms.

“It has been a bit of a problem for the last year-and-a-half,” says Sunscreem’s lanky dungaree-hanger Paul, “because people are continually going, ‘Well what are you like then?’ I suppose what we’re doing is a bit odd, so you sort of expect it. There just isn’t a pigeon-hole way of doing things for us.”

Despite the incomprehension of sludge-brained chunks of the music business establishment (Gallup recently penalised the chart position of their Love U More 45 because they couldn’t understand why a major label act was selling so many records in independent shops), Sunscreem have slowly been proving the viability of rave associated music as long term pop.

One-time beaters of metal and guitar dabblers in the wilds of Essex, they found a unity of purpose in the summer of ’88/’89 dance scene at The Barn in Braintree, a club also frequented at the same time by The Prodigy and The Shamen.

They gigged endlessly at raves around the country, recorded in their own converted milk-shed studio on a farm in Essex, and their third single for Sony Soho Square, Love U More, broke into the mainstream. Sounds like the sort of thing pop groups do, really.

The clever bit with Sunscreem and their digitally aware cousins, however, is that they are as at home with a laser-guided dancefloor remix as they are with a radio digestible song (see the multiple remixes of new single Perfect Motion). The dance ghetto is too cramped for the likes of Sunscreem. Their forthcoming LP is not called Bangin’ Amnesiac Obliteration, it is called O3, the symbol of oxygen atoms in the ozone layer.

“I think there is a danger that, because of the dance element, whatever it is, people still think of it in the same terms as ’70s disco,” argues Paul. “And there’s no comparison whatsoever between the two. It’s a completely different set of people involved. It’s a different thing. I think that sometimes people assume that, if you’re a band playing dance, then you’re some kind of disco soul thing. Most of our songs have actually got quite serious lyrics.”

Lucia: “It’s not like we’re a political band, but every time I sit down and write it ends up being about global warming or something like that. It’s all quite catastrophic. Lots of catastrophe. Personal catastrophe, too.”

Sunscreem songs, the scattered phrases and peaking rhythms, are articulate, but they’re articulate in a way that the defenders of Fortress Rock refuse to acknowledge, as if the sound of the Pixies’ caterwaul guitars, which speak volumes to a generation trained to invest emotionally in distorted block chords, was somehow intrinsically more eloquent than layers of rhythm and damaged synthesiser loops.

It is, of course, what you’ve experienced that allows you to make sense of a type of music, and as Sunscreem and co are well aware, there is now a whole generation for whom straight guitar music means jack shit.

Paul: “Some dance music is maybe very simplistic to outside people, but it’s still firing up people to go and do it. Five or ten year ago everyone wanted to be a guitarist or a singer, now everyone wants to be a DJ. There’s loads of kids out there with a turntable and a sampler. And you’re can’t stop it because it’s technology-driven. It’s like the electric guitar coming along. You just can’t reverse it.”