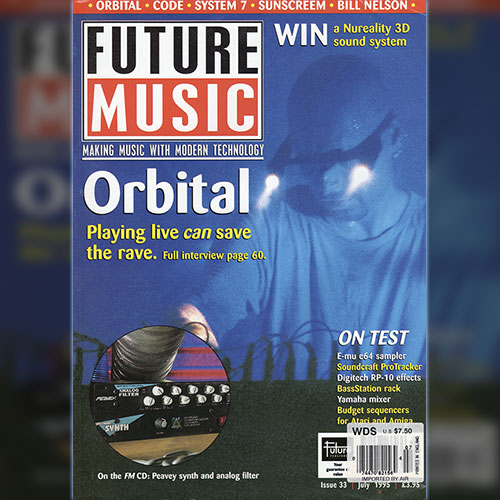 Just as things were hotting up for Sunscreem in ’93 – three tracks (Perfect Motion, Love U More and Pressure US) getting high placings in single and club charts, and the album O3 nominated for a Mercury award – the five-piece disappeared. Burned out already? Locked in studio-land by an over-zealous record company? On the contrary, it transpires that the band returned from their tour with New Order to not only work on their second album, but also to release club singles secretly under the pseudonyms Anna-din [sic], Anna-crusis [sic] and others.

Now, 400 gigs later, with a choice of seven possible singles to release and the album nearly ready, Sunscreem appear at UKTG ’95 to give the Starship Universe tent a taste of Essex energy. They’ve got some new material to showcase, and a reconfigured state set-up to get their heads round…

“Before it was designed so that we could go straight on at raves and plug straight in, in five to ten minutes – the whole band,” says Paul Carnell, Sunscreem’s keyboard player.

“Left and right, there you go!” adds vocalist Lucia Holm. “Originally we had all our stuff in two 19-inch racks, which were just wheeled on and everyone plugged into – vocals and everything. But it was very inflexible – everything hard-wired into one rack. If we suddenly went, ‘Wouldn’t it be nice if we could get a 303 on this track’, there was nothing we could do. There are four racks now: drum rack, vocal, keyboards and sampler…”

“It’s taken us quite a while to get used to it,” says Paul. “But now we can patch things where we like, and it all goes into one trunk, where we have all the patching for the whole stage. So now if we need to, say, add more effects or whatever, we can do it.”

Can they still perform the fine art of setting up their gear in under ten minutes?

“In the Royal Albert Hall we had it down to eight or nine minutes,” boasts Paul.

There’s no DAT up the Sunscreem sleeve: “We had lots of bright sparks coming up to us and saying, ‘Oh, you must be playing to a DAT’. In fact, I think your magazine printed something like that,” Lucia accuses.

Actually, it was a reader’s letter suspicious of the Stereo MCs some issues ago. But go on…

“It’s quite insulting, but also a kind of compliment,” she says.

The unlikely Sunscreem backbone is a laptop PC, souped up with 64 active MIDI channels from four ports, and running a Voyetra sequencer. From there, Paul has supreme control, bar some front-of-house submixing for Lucia’s vocal. In three years, the set-up has only failed once, through uncomprising human error.

“I knocked a bottle of beer over the PC!” admits Paul. “It went all over the keyboard, which then stopped responding. So we got the DJ on, and took it to the men’s toilets and stuck it under the hand dryer! We were back on in ten minutes. People were coming into the toilet and saying, ‘Hey, mate, any idea why the band’s stopped?’”

Sunscreem have got the live-electronic thing in a bag. At the risk of sounding cocky, Paul credits the band (along with The Shamen’s Synergy show, Lucia is quick to add, which established a symbiosis between DJ and band) with influencing other bands whom three years ago were playing to DAT, but now sequence live.

“But we have to take things one step further,” he adds. “It’s changing the whole way bands look at things: you know, your PA, your DJ, the band, the lights – you have to change everything into a ‘sound system’. The On-U guys have been doing this whole principle for years.”

“You go to a normal gig,” says Lucia, “and it’s like, here’s the the backing music, here’s the band. We’ve tried to turn that around with more mix and match…”

“More interaction with the PA, the whole sound system thing. We’ve got a few things up our sleeve, but we can’t tell you about those,” Paul smiles.