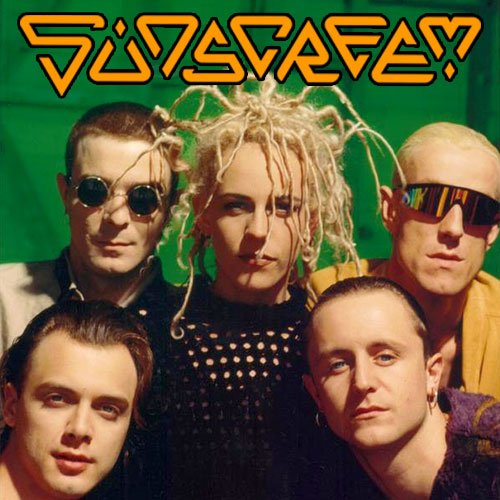 by Sherman of New Musical Express, UK  for Columbia Records

I caught Sunscreem for the first time at a South London club in the autumn of ’91. Friends of friends. Come and see this band, they said, they play live. I was confused. To be absolutely honest, I was expecting dodgy indie/dance band, of which there was a spate around that time. To be honest, I was knocked out.

I’d witnessed countless PAs at raves, enjoying the spectacle but knowing all that was propelling them into the arena was a DAT tape and a couple of occasionally prodded samples from a propped up keyboard player. What Sunscreem offered wasn’t in the rulebook, this was like being at a ‘proper’ gig yet still being caught up in the full culture of clubbing.

Alongside the bouncing, dreadlocked, angelic-sounding vocalist and the keyboard player brutalizing his equipment, was a bass player who acid-danced whilst plucking out the tightest of guidelines, a guitarist who jacked about like Angus Young on a smiley binge, and a real drummer, machine-like in composure, who added weight to the assortment of sequences and samples.

They formed this incredible sound that was having an effect on a crowd lost in the animated energy that emanated from the stage. They must be miming, I thought. They weren’t.

In just under a year Sunscreem have matured into one of the tightest live bands of any circuit, signed a major record deal, played over 200 gigs, appeared on Top Of The Pops, and released their first album O3. And this is just the beginning.

Sunscreem was formed in February, 1990 (from the ashes of a previous band) by Paul and Lucia in their hometown of Chelmsford, Essex. Inspired by the new wave of techno/house music and the lack of live bands on the scene, they began recording demos in their own 24-track studio (built in a 14th century milking shed!) with the assistance of Darren Woodford on guitar.

Lucia took over the frontspot when various instrumentals began to take on the shape of songs. Rob Fricker was recruited in June ’90 as a result of his ‘appalling driving and nasty grin’. After meeting local DJ Dave Valentine while playing at a warehouse party in London, the band spent the rest of the year organizing their own events with other Essex acts.

In January 1991, Sunscreem realized more serious ambitions when, after months of interest from major labels, they signed with SoHo Square, a subsidiary of Sony Music UK. In order to allow as much musical freedom and originality as possible, they decided to update their barn setup (now named Retreat) rather than take up the option of using commercial studios. In May of that year they released 1,000 white label copies of Love U More, which received Kiss-FM and Radio One airplay and a good response from clubs in the UK and abroad.

In the summer the band began to play gigs at clubs and raves every weekend all over the country. They created a steady buzz, slowly carving a niche for themselves as one of the hottest ‘Rave PAs’ around, and refusing to play on those occasions when they were asked to mime to a DAT. The press however, still threw them into the same pot as numerous other acts on the same circuit (and perhaps you would do well to ask yourself where all those names are now).

It was in-between these gigs that Sunscreem began recording, often returning home from a show late at night, only to dive straight into the spaghetti-like wires of Retreat. There they would capture the spontaneity, excitement and raw energy of their live shows, something which for many a live act, rock or whatever, has often proved an impossible task.

Early fruits born of these often all-night sessions were harvested in September ’91 when white label remixes of Walk On were released to excellent club and press response. Mixmag described it as an “excellent debut… a huge dance hit!”

Continued hard graft on the club circuit was followed into the new year by their second single, Pressure, which reached #60 on the national charts.

By July ’92, a full-scale release of the double-pack 12-inch version of Love U More, featuring mixes by the band, Slam, and Farley/Heller, had reached #1 on all three UK dance charts. In the US (as an import), it appeared on no less than four alternative and rock charts. Working the melodic edge in its favor, the catchy song format slipped in sweetly (with consummate ease) between the gutsy ethic of a club anthem and received excellent reactions in both clubs and press. It peaked at #23 on the national charts, finally catapulting Sunscreem into the public domain.

“If you just want to play club music to clubber, then fine,” says Paul, “but you don’t expand.” In fact, the club environment is a different place than your car or working in a factory with the radio all day. To be able to take the music out of the clubs and into a format of conventional ideas, it has to be converted in a way that the uninitiated can understand. And Sunscreem realized that utilizing a song format was an ideal waiting to transcend that hurdle.

Nothing could stop them. Two months later, the beautifully melancholic Perfect Motion destroyed everything in sight, playlisted and plotted on every DJ’s chart, finally reaching #18 nationally.

Commencing a mammoth 52-date tour, this time largely playing colleges rather than clubs, the reaction was excellent. Melody Maker described Sunscreem as “the UK’s most innovative pop band” and they made the September ’92 cover of Mixmag. It didn’t stop there, as Sunscreem crowned an incredible year by winning the DMC/Mixmag award for Best Newcomer at the Royal Albert Hall in November, 1992. It was the perfect stepping up point to their next one, their debut album O3.

Sunscreem has already achieved an important step for dance music. They have made a complete mockery of the ‘two-lads-with-a-keyboard-and-MC-miming-to-a-DAT’ scenario – which is OK to split the evening up on a clubnight when a PA appears sandwiched between DJs, but Sunscreem has directly taken this angle and made their shows into the event itself.

Sunscreem incorporates all the exciting aspects of clubbing and a live band, then melts them into a visual extravaganza. They undoubtedly lead the way in this unique field. “We could play to DATs,” says Paul, “It would be easy but, to be honest, we’d get so bored with it. Playing our way, there’s so much you can do, we can manipulate our sound and change parts every night if we like, that’s what keeps us fresh.”

Sunscreem has avoided becoming just another product of the pop/rave scenario. There is substantially more to their setup. They have taken a genre of the dance scene and created a unique halo of their own from it, something of which they are rightly proud.

To hold up Sunscreem as ambassadors for the future is no exaggeration. By incorporating real instruments into a technological setup they’ve fertilized a more organic sound, uniquely integrating sounds from all corners of the dance globe. They’ve already become an inspiration, a pointer to where popular dance music must direct itself if it wants to remain healthy and alert.