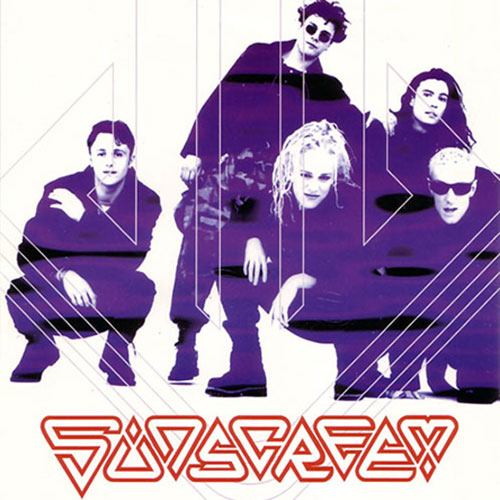 “There’s a lot of snobbery there that can be hard to cope with,” says Lucia. “If you have songs and you’re identified as a dance band, some people find it odd and they think we’ve jumped on some bandwagon. But we’ve been doing this far longer than most people that put out dance records. And they’re so surprised that there are lyrics that have more to them than ‘Ooh baby, I love you’.” Coupled with this is the confidence of a band as equally at home playing live onstage as they are inside the recording studio.

England’s latest techno dance crossover success may seem to have come out of nowhere, with their singles riding high on the British dance charts, but Sunscreem has been at it for years. Their string of UK hits, including the chart-topping Love U More, Pressure, Broken English, and Perfect Motion are among the baker’s dozen cuts to be found on O3, Sunscreem’s debut album.

Though on techno’s cutting edge, the Sunscreem sound has evolved from an intimate association with their machines – without worrying about current trends. “The band’s name comes from a sound on the synthesizer,” says Carnell, Holm’s primary partner-in-crime. “The sound’s on our track Psycho. (*1) It’s one of Lucia’s favorite sounds. Depending on how hard you hit the key, it either explodes or it gives a very mellow sound.”

His statement sums up the album’s range as well. Self-produced, Sunscreem’s debut features tracks that traverse the boundaries between hardcore techno, classic house, electronic pop, and driving atmospherics. The music on O3 reflects the band’s experience in song construction. This experience carried over to their innovative cover of Marianne Faithfull’s groundbreaking Broken English. Its inclusion shows Sunscreem’s sense of progressive electro pop history as well as an appreciation of a song with real feel.

Sunscreem’s musical depth made the creation of their biggest record yet, the pulsing, synth-rich Love U More, a simple process. “Lucia wrote the lyrics in one go,” says Paul. “It varies of course; on some songs we’ll spend days and days, the other 90% is written in a few minutes. Love U More is a very ambiguous song – in one sense it’s a love song, on the other hand it’s an ‘I can’t love you’ song. There’s also quite a lot of nature references, so it’s an environmental song, too.”

At Sunscreem’s core lie Carnell and Holm and their particular histories. For a band so technologically wise, both incorporate an ironic love and devotion of the organic. Paul’s recording studio is in the near-rural suburb of Essex and is built in an old barn. “I grew up literally 800 yards from the studio, so I’ve lived in this part of the country all my life in the middle of nowhere.”

Nonetheless, at 31, he has learned a lot about music and recording. When he first started taking piano lessons at age of six, he also got a special education. “I had quite an unusual piano teacher who didn’t really believe in teaching people to read music,” Paul says. “She used to write a lot of music herself and taught her pupils how to read by ear.”

Electronic music entered Paul’s life early on. “When I got to secondary school, I just taught myself and played by ear,” he recalls. “Even with the first group I had at school, I had an old Revox tape recorder and a set of oscillators which was basically circuits from a synthesizer. But we didn’t have any keyboards, so we generated it all by twiddling knobs.”

Depeche Mode, one of the first electronic pop bands to reach mega-stardom, came from Paul’s town. “They just found the right combination of people,” he comments. “My first group was RLD – I can’t remember what it stood for – and the next was called the Abraham Darby III. We just weren’t ready yet. After I left school, it was just a bassist, a drummer, and myself on keyboards. Very technologically orientated, it was called Newspeak. We actually had a small independent label deal and had one single released on a label called Storkbeat. But it died a death. This was in 1979 or ’80.”

During this time, Paul taught music and worked odd jobs, but making it musically was his obsession. “I was forming a new band,” he continues, “and we had a drummer, myself, and a singer. We were looking for a bass player, and Lucia put an advertisement in the local music shop saying she was a cello player looking for a band. Our drummer – not being entirely sure what a cello was but thinking it might be a round the bass spectrum – rang up Lucia and asked, ‘This cello thing, is it a bass or what?’ Well, she claimed she could play a bit of bass as well, so she came along originally as a bass player. We did some good tracks as Shot The Rapids and played live with sequencers just as the acid house thing was exploding in ’89. Suddenly we were going out to clubs, hearing totally synthesized music that had a bit of Philip Glass, rap, house piano, and sometimes a soaring melody. So we thought ‘Right, let’s get on with it!’”

Lucia, whose father was a gardener, was torn between music and a love of nature. She had even worked on a farm for over a year after leaving college. Maybe because of Lucia’s love of the modern and the traditional, her combination of throbbing dance pulses and old-fashioned songwriting is musically effective.

“I was born in Kent,” she begins, “and always tried to make instruments from my Mum’s wine glasses or string guitars. At 8, I had the choice in school to play an instrument, either violin or cello. I chose cello. It’s a nice, sexy instrument that makes nice, sexy sounds and is in the shape of another human.

After I finished high school I went to Dartington College of Arts deep in southwest England. They had drama, music and art there, but I only did music and a bit of dance. The most interesting course I took was 20th century music, which ranged from English folk and electronic music to Japanese, African, and Balinese music. I got into all that systems music too, the modern stuff as well, like Philip Glass.”

In the learn years before they signed with a major label, Lucia supported herself through a private list of clients who either solicited her skills in gardening or as a music teacher. From such sensibilities, she adds a warmth musically and lyrically. “I played some cello here – double-tracked on the opening of Pressure – but we mixed it down a bit,” she explains. “On the next album, we’ll have lots more cello and maybe some of the African music that I’ve gotten interested in.”

The rest of the band members bring in other key elements. “As well as being a guitarist, Darren brought a studio engineer’s expertise to the whole equation,” says Paul. “Since the age of 14, he had worked in a local studio close to here. So Lucia, myself, and Darren had been working on demos in the evenings trying things out in our studio, and as we became more involved in the dance thing, the three of us started moving more in that direction.”

Finally they sought a drummer and bassist. “The three of us advertised in the music papers,” Paul tells, “yet funnily enough, both Rob and Sean were met through word of mouth. We rang up all the music shops and asked if they knew any bass players. That’s how we met Rob. We wanted someone who was into the club and dance scene, which Rob had been involved with – he had even put out some raves. And he was a gregarious stage personality. Once he finally joined in February ’90, we formed this band.”

The intent was always to be a live performing unit, not just a studio concept. “Once there were five of us,” says Paul, “we started playing gigs but in a fairly unconventional way – at raves or parties. Sometimes we would take over a more conventional venue and put on an evening that was like a warehouse party. Gigs such as these drew the attention of major labels. At that point, we didn’t have a record out and we’d only played a half-dozen live dates. The an A&R man from another label saw one of our live performances and got very excited. He spread the word and, within a couple of months, we had most of the major record companies interested in doing something with us. It all happened very, very quickly. By the time we got round to Christmas ’90, we had offers from other labels and Sony.”

Sunscreem was signed to the company in February ’91, through SoHo Square, a label started by Muff Winwood, the famed rock producer. “He approached us and said, ‘Effectively, you’ll be on a small label within a bigger label’,” explains Paul. “If we’d gone for a strictly dance music label, that might have been wrong for us because our music takes its inspiration from the underground rave thing, it’s of so many different styles.”

Sunscreem is launching their American debut on Columbia following a year of climbing both the British dance charts and pop charts. While attention is sure to follow them in the US as it did in England, hopefully it will not be as some fashion-conscious bopper band. Otherwise, they may have to endure having tales told about them like those in the British press of Mervyn the tortoise.

“There’s this chart show in England where they play the video, and snippets of useless info about the band go up on screen,” Lucia says. “Our A&R lady was feeling a bit mischievous and decided that I had a pet tortoise named Mervyn, which is Muff Winwood’s real name, and that I took the tortoise on tour with us.”

“We were touring Scotland,” Paul continues, “and people asked, ‘Where is your tortoise?’ We had no idea what they were talking about. We hadn’t seen the mentions in the papers. Another time a headline said Lucia was knocked out by sprouts. She’s allergic to sprouts, but they claimed she ate a plate of them and was laid up in the hospital and almost couldn’t do the tour.”

Sunscreem isn’t a teeny bop pop band where members are youthful entrepreneurs jumping on the techno rave bandwagon that swept through the clubs and then spread to huge outdoor events and Britain’s pop charts. Nor are they a crew of studio-wise but instrumentally unskilled deejays who have sampled and remixed their way into popdom. This band’s future lies less in press clips and more in the three S’s – synthesizers, sequencers, and samplers.

“Our musical taste is evolving all the time,” Lucia sums up. “We’re always changing things, hence all the remixes. We’ve got the studio, so we can do it quite easily ourselves, which allows us to evolve really slowly and do our own thing. It’s no good following fashion.”